The Aurora and Northern Lights, Incredible facts and info

What is the Aurora and How do I see it?

Text below Compliments of Melanie Windridge, Author of the best selling book "Chasing the Northern Lights"

What is the aurora and how do I see it?

The aurora (the northern and southern lights) is an incredible light show caused by charged particles accelerated into our upper atmosphere.

The aurora is triggered by the Sun and varies in strength depending on the Sun’s activity.

A “solar wind” from the Sun interacts with the Earth’s magnetic field, injecting it with energy and setting up a cycle that catapults electrons into the Earth’s atmosphere at the poles, where they collide with oxygen and nitrogen and cause them to release light—the aurora. See video below.

There’s more info about Dr. Melanie Windridge, and the science of the aurora as well as travel and clothing tips here.

What Causes the Aurora?

The “northern lights” are caused by collisions between fast-moving particles (electrons) from space and the oxygen and nitrogen gas in our atmosphere. These electrons originate in the magnetosphere, the region of space controlled by Earth’s magnetic field. As they rain into the atmosphere, the electrons impart energy to oxygen and nitrogen molecules, making them excited.  When the molecules return to their normal state, they release photons, small bursts of energy in the form of light.

When billions of these collisions occur and enough photons are released, the oxygen and nitrogen in the atmosphere emit enough light for the eye to detect them.  This ghostly glow can light up the night sky in a dance of colors.  But since the aurora is much dimmer than sunlight, it cannot be seen from the ground in the daytime.

Why the different colors?

The color of the aurora depends on which gas is being excited by the electrons and on how much energy is being exchanged. Oxygen emits either a greenish-yellow light  (the most familiar color of the aurora) or a red light; nitrogen generally gives off a blue light.  The oxygen and nitrogen molecules also emit ultraviolet light, which can only be detected by special cameras on satellites.

Why does it take different shapes?

Scientists are still trying to answer this question.  The shape of the aurora depends on where in the magnetosphere the electrons came from and on what caused them to precipitate into the atmosphere.  Dramatically different aurora shapes can be seen in a single night.

Where can I see the Aurora?

Auroras usually occur in ring-shaped areas centered around the magnetic poles of Earth. The complete rings, called the aurora ovals, can only be seen from space.

The best places to see the aurora are in Alaska, Canada, and Scandinavia, during the late evening hours.  Resident of the northernmost United States – near the Canadian border – typically see auroras several times a year.  On rare occasions – perhaps once per decade – auroras are visible as far south as Florida or Japan.

Do Auroras occur in the southern hemisphere?

An auroral oval also exists around the southern magnetic pole.  This picture from space shows the simultaneous “crowns” of the auroral ovals.

The Aurora Forecast For North America and Europe

This Aurora forecast is totally experimental and should only be used as a rough indicator of potential viewing of the Aurora. 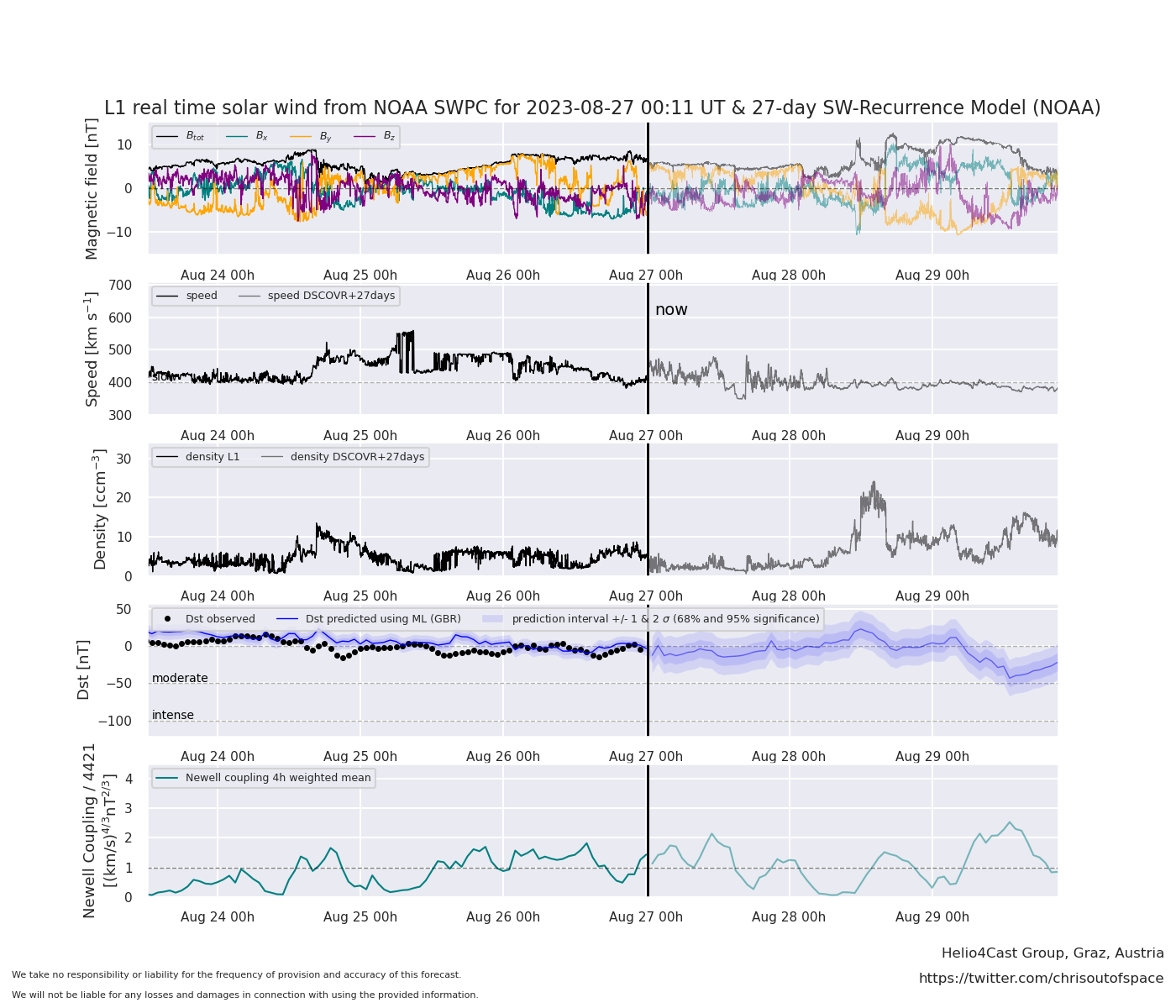 Feel free to contact us with any questions you may have!